This strand of the project will examine how far the trade and business strategies of publishers inside France differed from those of extra-territorial publishers such as the Société Typographique de Neuchâtel (STN) – whose trade was captured in the original FBTEE-1 database available at http://fbtee.uws.edu.au/stn/interface/. Hence it will create a more comprehensive and representative map of the late enlightenment wholesale and retail book trades. 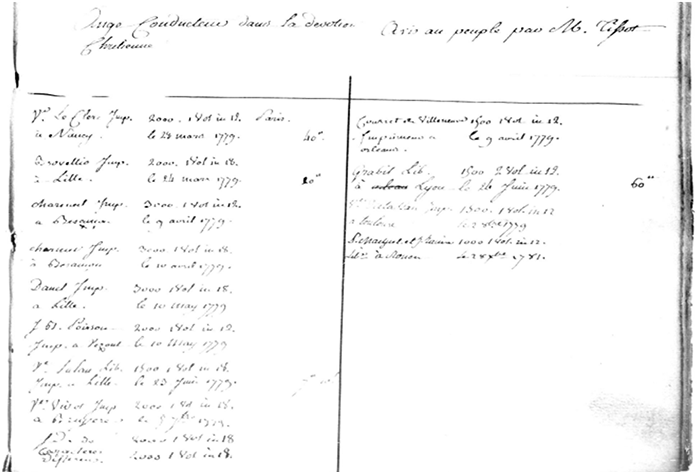 This will help answer questions such as what sorts of books were produced and sold when, where and to whom? Did French provincial and Parisian publishers produce and market different types of books in similar proportions to the STN? Where did they get their books from? How far did their stock and client bases vary from those of the STN? How much of their trade was long range? How far did major Parisian houses avoid illegal or pirated books? Did provincial booksellers and printers behave similarly? Were their strategies and fortunes affected by major changes in French government policy or regulations? Did such measures impact on them in similar ways to the Swiss publisher? How far did retailers trade in locally produced books? How much of their trade was in religious works or text books for local markets (sectors our pilot studies suggest have been massively under-reported in previous surveys)? What was the nature of the pirate trade, and how extensive was it?

The strand of the project will be overseen by Simon Burrows and provides a bridge from the FBTEE-1 to FBTEE-2. In particular it will triangulate data from the FBTEE-1 database with data on the French pirate and licenced book trades, and the stock records of a range of Parisian publisher-booksellers. The main sources for this work are:

Data from the first two source sets has already been entered into a prototype FBTEE-2 database in 2013-2015. Data entry from the third source is expected to be completed in the early months of the project. Subsequently new printed works listed in all three sources will need to be classified by subject and genre according to FBTEE methodologies.

This project seeks to promote cultural awareness by charting the contours and transnational connections of enlightenment ideas and print culture through the use of a powerful digital tool. This tool will be made publicly available. It aims to increase national capacity by developing researchers trained in, and promoting understanding of, new critical tools and methods for applying digital humanities technologies to complex problems and uncertain and incomplete data.