Traditional dissemination studies, focusing on the overall popularity of a particular book, author or theme can only take us so far.  Because of the scale of our database, which covers over 500 towns and 400,000 copies sold, it is possible to get an idea of the variant tastes of francophone readers across Europe and over time.

For example, the database allows users to see where all works with a particular keyword or keyword combinations sold, and thus to make comparisons with works with other keywords.  Here is a query of works tagged ‘History’ and ‘France’.

The results of this particular query are broken down by eighteenth-century sovereign territory, which allows for comparisons between France and, say, the Austrian Empire.  Perhaps, however, researchers are more interested in comparative reading tastes between different towns, or regions, or between regions as they exist today rather than as they were defined in the eighteenth-century (i.e. modern Germany rather the Prussia).  Because each town is recorded in the database in several different ways, such comparative queries are simple.  See, for example, the number of ways in which Neuchâtel, a Prussian principality, is recorded.

Using these tools, comparisons of the sales of any author, text, or corpus can be made between any different European towns, regions or states.  In the process, we can begin to analyse the eighteenth-century European book trade with more subtlety than has previously been possible. 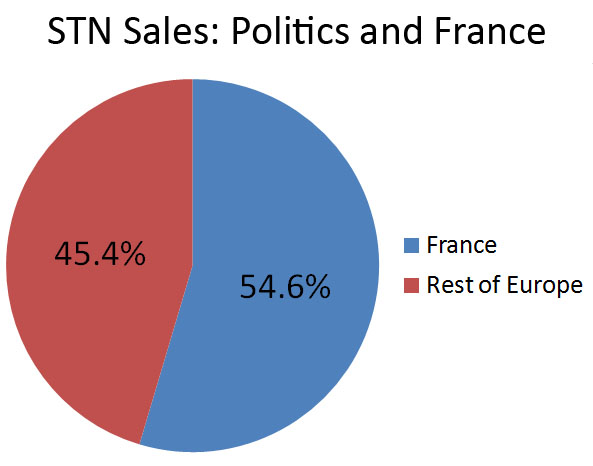 Alternatively, the database can be used to compare local and regional markets to the overall European book market.  The following query shows the STN’s best sellers in the Besançon region between 1769 and 1794.

The project, we hope, gives researchers a powerful new tool with which they can analyse the European book trade as a series of connected but separate markets as well as a single unity.