Which works were the STN’s best sellers?  Where and when precisely did they sell?  The French Book Trade database allows users to discover the STN’s best-selling works across Europe in any given time period, down to the individual day. 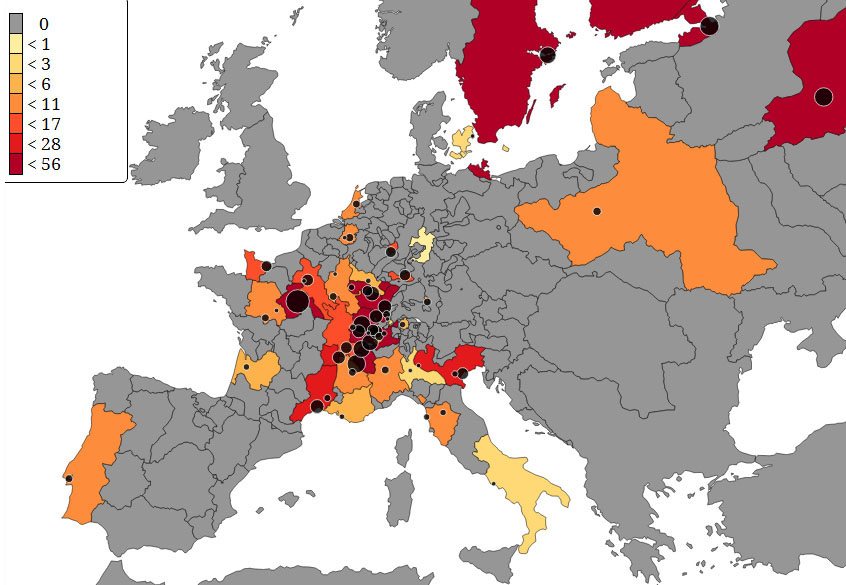 The results of one such query, for Tissot’s Onanisme, are mapped here.  The database contains about 3,600 different works that can be analysed in this way, creating an unparalleled composite picture of what Europeans read in the late Enlightenment before the French Revolution.

Alternatively, one can examine the combined sales of particular authors, or focus in upon a specific region.  The following map, for example, shows the STN’s sales of the corpus of works attributed to the baron d’Holbach across France and central Europe. 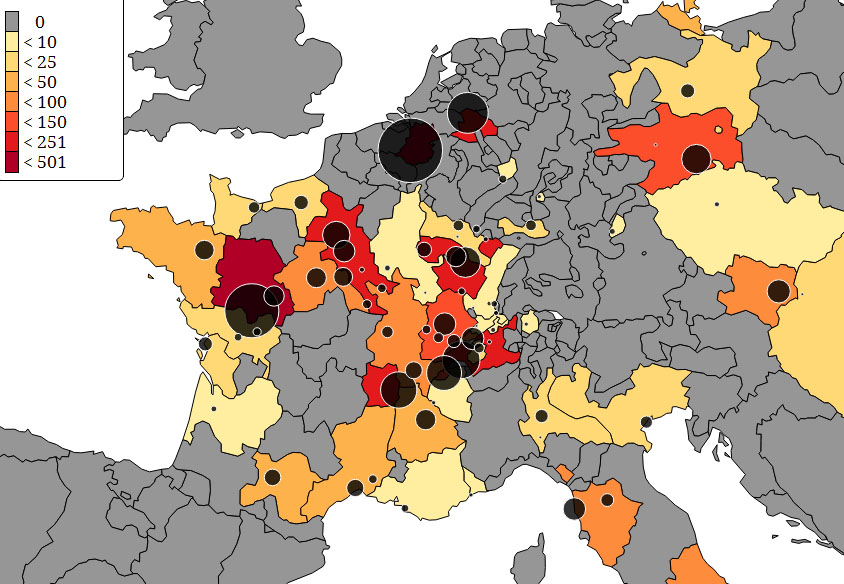 Moreover, every work in the database is categorised according to both a modern keywords system, and an eighteenth-century tree structure based upon that used by contemporary Parisian books sellers.  As such, the dissemination of religious works, travel books, texts about wine making, animal husbandry – almost every conceivable subject, serious or otherwise – can be interrogated.

Users of the database can study the STN’s trade in as much or as little detail as desired, from Europe-wide queries into the popularity of Protestant Bibles to browsing over 70,000 individual transactions.  Here, for example, is a snapshot of a section of the STN’s sales (and purchases) of a Genevan French-language edition of Henry Fielding’s Jonathan Wild.

And here are the precise edition details for this edition, taken from the database.

We can go further.  By using annualised or monthly queries, it is possible to reconstruct sales trends for authors, books or corpuses (ie books concerning the Necker crisis, or Voltaire’s publications) over time.

Finally, the database is a powerful tool to deal with the question of the dissemination of illegal books.

Most scholars associate the STN with the French trade in illegal books.  Operating beyond the borders of France, and protected by the overlord of Neuchâtel, Frederick II of Prussia, it was in an ideal position to pump banned books into the Bourbon realm.

The French Book Trade project offers users a number of markers of illegality, drawn from different jurisdictions.  It records which works were included on various indices of banned books (the Papal, Josephine and Spanish); as well as the works held in the Bastille when it was stormed or the highly illegal libertine books of the type identified by Robert Darnton.  Search queries allow users to search exclusively among the resulting corpora of illegal works, or to rule illegal works out of their searches.  Some search results might come as a surprise.